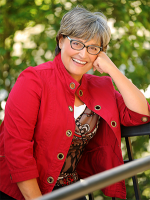 Pat Detmer is an award-winning humor columnist, copywriter, and speaker who has been published in newspapers, including the Journal American, Seattle Times and The Whidbey Island Marketplace. She has also appeared in Newsweek and wrote a column for the Newcastle News.

She’s won or placed in fiction contests, most of them having to do with speed (24-hour from topic assignment to finished piece), brevity (100-word and 200-word flash fiction), or scenarios where the characters are already established and full-blown (three appearances in Star Trek’s Strange New Worlds short story anthologies.)

Pat and her husband are founders of The Quincy Group, a business consulting and brokering company.