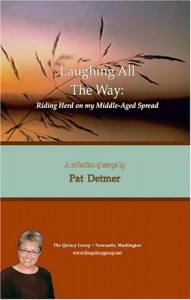 The essays that appeared in the Whidbey Island Marketplace are available in book form:

“Laughing All The Way – Riding Herd on My Middle Age Spread”

A collection of humorous personal essays from Pat Detmer, a Pacific Northwest author, who produced a column called “Laughing All The Way” in a newspaper on Whidbey Island. Whidbey Island – north of Seattle – is where they had a second home: their “middle age spread.”

There were only nine professions available to us in the fifties: Nun, priest, ballerina, fireman, nurse, doctor, businessman with a briefcase, cowboy, and policeman.” — From the book.

Want more of Pat in Print?

Learn About Her Contributions to popular fiction Here